August 04, 2012
Previous posts in the series can be found here!
I know I'm not alone on this, but sometimes I feel like quite the sucker when pulled into buying a new shiny mascara before doing any reading on it.  The display claimed a new formula of sorts, some gel something - the lashes would be soft (was thinking like one mascara I do like the Maybelline Full 'N Soft).

Over the time I've used this mascara, I've found it a pain to apply.  I do tend to build up a lot of mascara on my lashes, I want a good amount of darkness at the base of lashes tapering up to the top.  In order to get the amount of even coverage of mascara on the lash, I felt like I had to fiddle around for almost twice as long as a "good" mascara (for me).  Another supposed selling point is that the wand has a large hinge bendy point just after the bristles.  I don't think I've ever seen a bendy wand actually bend when applying mascara.  Unless you have some mega coarse thick horse hair lashes, I'm not sure how you'd ever encounter enough resistance for it to bend.  Maybe it's just my technique. 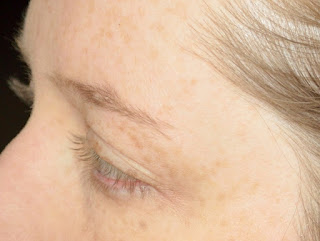 Here's a reminder of what my naked lashes look like, they are fairly long, naturally curled and moderately dense.  My only real difficulty is ensuring complete mascara coverage of the ash blonde coloring.  After that, it's just up to my preference of look.

The end result is similar to my other mascaras, but the time needed to achieve it is what ultimately bothered me.  It doesn't cause lashes to stick together and become uni-lashes like a wetter mascara, such as another in my series, Maybelline Great Lash Lots of Lashes. 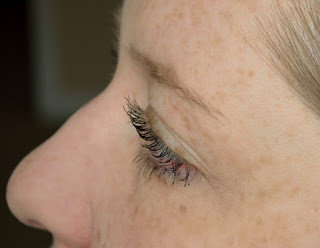 I would say that all mascaras give me a certain amount of lift which may come off as them being slightly curled, but I think it's just that I glop on enough product that it helps them lift a tiny bit. :)

Have you tried the Mega Plush mascara?  How did you like it?  Would love to find out if it works better for anyone else!  I'd rate it as an okay, not worth repurchase, for me.