April 17, 2013
I've had my makeup in a desk I bought at Macy's for a good 1-2 years, I've redone the way it's stored a couple times now. This time, I was prompted for a re-do because I felt frustrated in blush selection. I have quite a few - but since I was using a shallow drawer blushes were laying on top of each other or stashed in the back, I'd miss them completely. Unfortunately, moving them out of that drawer entailed moving almost everything else. It was for the best, my eye palette/single storage was a bit of a mess in a similar fashion as well.

So, this is the desk I have to work with. I don't use any other storage for makeup or nail polish. I love being able to plop down in my chair and have everything in reach. It took me quite some time to find a desk that has this many shallow drawers (not mainly deep file drawers) and was in a style I like. Nevermind the grubby foundation/concealer fingerprints, my goodness! This is a downside to a dark wood. 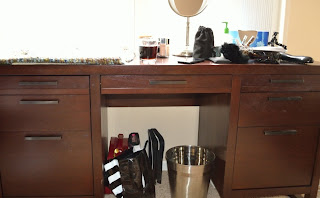 Underneath, I keep a trash can and a Sephora tote that holds my "empties" (trash that I want to talk about later!) and in the back is my collection of travel makeup bags. The top is still a mess because I also was cleaning out the bag-o-junk I had brought home from the office that I hadn't sorted through. Ear muffs, tons of headbands I never wear, etc! 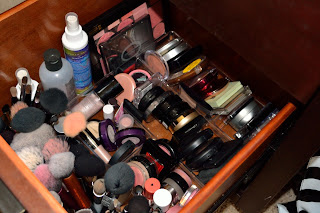 Starting at the bottom left, this is a file drawer. I struggle to find a good use for this since it's difficult to get into when it's darker in the morning and I don't have a lot of tall things that take advantage of the height of the drawer. It used to contain a mishmosh of brushes, setting sprays, cream shadows, giant eye palettes and old lip glosses that needed to be pitched. The brushes and sprays stayed, and I have moved my blushes and highlighters down here. Putting them in a organizer where they could be stacked standing up makes it easier to see what I have and I figured blush/highlighter compacts would be easier for me to find when it was darker in the depths of the drawer. 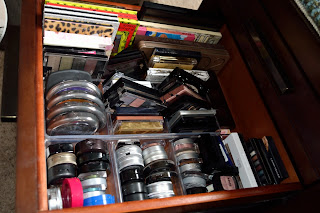 Next drawer up on the left is moderately deep so it allowed me to stack my medium sized eye palettes and use two organizing trays for the smaller ones along with singles. Previously this held nail polish and the eye palettes were in the center shallow drawer. I definitely like getting these stacked standing up instead of stacked and laying down. For liners and single shadows, I organize by grouping colors together and natural/neutral/earth tones separately. 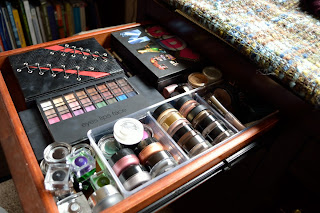 Top drawer on the left holds the gigantic palettes and ones I don't use much along with cream potted shadows, pigments and gel liners. Most of this used to live in the file drawer mentioned above. Both the Urban Decay NYC and Tarte True Blood palettes are not my favorites (UD has too many glittery shades, Tarte has shades I'm just not drawn to with less than stellar pigmentation plus tend to be powdery). 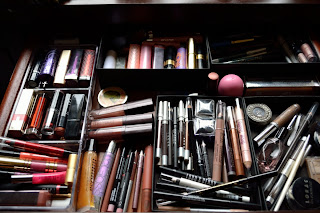 The center drawer now holds a lot of things that used to live on top of my desk. The lipsticks and glosses were in a too-small organizer and the eye liners and cream shadow pencils were in pencil cups/glass jars. I split the lipstick into everyday/neutral/lighter colors and then there's an attempt to split out plums vs reds and miscellaneous deeper shades. I added a holder for brow things which is much easier to have everything in one place. Before I had the spoolie/brow brush and brow gel in the pencil cups/brush containers, the Milani Brow Kit was somewhere lost in the depths of a face makeup organizing tray, brow colored gel was rolling around with concealers; it was a mess! 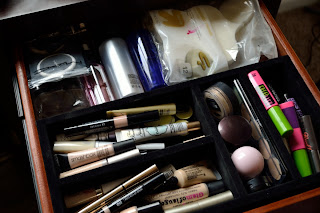 Top right shallow drawer used to be my everyday stuff. So, a couple foundations and powders, mascara, eye primer, concealer, some brow stuff - but then it veered off into a holding area for gel liner, some cream shadow pencils, etc. I decided to not have an everyday drawer anymore since it made me neglect my other foundations/powders. Now I have all of my eye primers and face concealers together, correctors and under eye powders, mascaras and miscellaneous tools. I stuck the liquids I used to keep out on my desk in here as well, an Estee Lauder makeup remover (came in a purchase with purchase kit), MAC Fix+ (when looking powdery or wanting to use a shadow wet), mini spray bottle with MAC Brush Cleaner for spot cleaning. Shoved my lash curlers that I almost never use in here (lashes are naturally fairly curled), makeup sponges, powder puffs, small sample jars and extra brush gaurds. 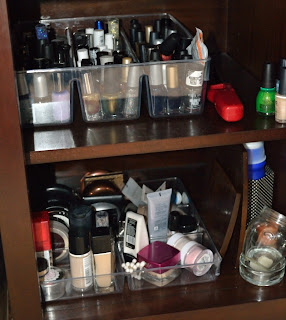 Last up, the shelves. I struggled with what to put in each drawer, but I was really on the fence about these shelves too. I hated the idea of having to pull out a tray with stuff on it, but I really wanted my foundation and powders standing up somewhere and I had limited options. I can probably swap this out for the blush tray since it takes more vertical space - but I also did pick the face stuff tray because the back is bronzers which I rarely use. I figured it would be less likely for me to drag the whole sucker out. Up top, I have nail polish with a little overflow on the side. I probably will need to trash some of the polish in there, some looked like they were in the realm of separating with no hope of return, but we'll see. Nail polish is a bugger in that way, and it's much more of a hassle to use it consistently. Do hope that's something I can hold off buying much of in the future!

So that's everything! The clear plastic organizing trays came from Target, I believe. I also repurposed some boxes that products from Sample Society came in, they're black and very sturdy - I wish I had kept more! It's not perfect but it'll do until I get frustrated and change everything around again, I'm sure. This round took 3-4 hours but probably half of that was spent staring and pondering when I realized my first idea wouldn't work. How do you organize your makeup? Thanks for reading, as always!
makeup organization products