June 09, 2013
I felt like purple today! I wanted to do something that had more color on the lower lashline and I had decided it shall be Urban Decay 24/7 Liner in Ransom and somehow MAC Extra Dimension shadow in Ready to Party (Glamour Daze collection) would be involved. 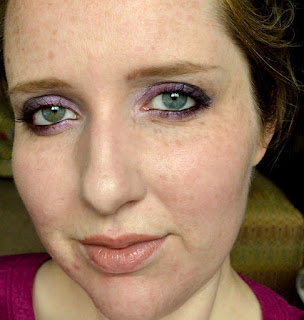 This is the final look I came up with. I used UD Ransom liner over most of the lid and blended it out with a brush, then layered some more over at the lashline. I also applied it to the outer two thirds of the lower lashline and smudged it out. It's not the best liner, especially compared to most Urban Decay 24/7 liners - but it seems universally difficult to do a really good purple liner. I used the deep blue-purple shade from Too Faced duo Skinny Dip on the outer half of my lid and barely blending into the crease. It contrasted nicely with the more pink undertone of Ransom.

I used MAC Extra Dimension Ready to Party all over the inner corner and inner half of the lid, somewhat overlapping where I pulled in the Skinny Dip shade. I did some cleanup and made an effort at defining a line between the shadow and my brows with NYX Milk cream shadow and LORAC Baked Matte Satin in Posh (discontinued) but it didn't go so well - mainly because the brush I used that I thought was clean, was not. Hah! No wonder it went all murky.

To finish off the eyes, I used L'Oreal Infallible Lacquer Liner in Espresso in my waterlines and Maybelline Great Lash mascara in Dark Brown.

On the rest of my face:
I'm still giving my chin time to breathe after a spazzy breakout on the right side (hence the convenient posing featuring my left side in pictures lately!). I, as usual, introduced a couple new products into my routine at one time and had a couple days where it was getting abused more than usual before the breakout. So, I'm scaling back and letting it heal and trying to determine what all was the culprit - or if it was just an overload of everything.