December 14, 2013
I have three other liners of this variety - black, blue and nude. I picked up the nude liner first because well, it's a nude liner! And word about town was these stuck to the waterline well. I have had the best luck in that regard with the nude liner - but I always say it may just be due to the fact that it wears off less noticeably. Both the black and blue break down near the wateriest part of the eye rather quickly but then linger closer to the lash line for a good amount of time.

I was at Walgreens last night picking up a prescription, so I browsed around the beauty section since they are having their regular clearance and I had a 15% off coupon. Didn't find much inspiring on clearance, but I did see that this liner in Taupe was in stock. Most times I check for it, it isn't. I take it as a good sign that it's popular! Or there's lackluster restocking, hah. I've heard mumblings online this was a good one to check out too, so there's that. If there's anything I tend to compulsively hoard, it is liners. I like having lots of colors and variety of textures, and there's always this hope that maybe *this* is the one that will stick like glue to my waterline (yeah, right!).

Anyhow, I picked it up thinking it's a little different from anything else I have in my already too large collection, so it's clearly a must-have! I know the formula is good for non-watery areas of the eye as well. There are so many good options for budgeproof liners these days! 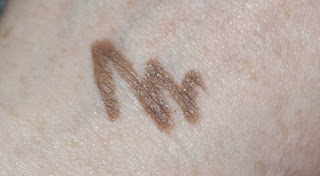 It's on the cooler side of brown, but not overly gray. I used it today on my upper and lower lash lines and loved it! I find that being so fair, using a standard brown or black on my lower lash line can appear harsh or overly smoky when I'm going for just a touch of definition. This was a nice natural looking shadow to define my lower eye area.

It's not even that noticeable, just a subtle darkening. Lovely!

I smudged it around the upper lash line and it blended in with the Jane Cosmetics matte shadow in Smoke I had lightly applied to the lid.

Have you tried any of the liners from this line or Taupe? What did you think?

On the rest of my face: