Beauty Favorites from 2013 and as a New Mom, Swatches and a Few Extras!

January 07, 2014
I found a decent spot to record a video for these favorites when we had some good sunlight this weekend, but realized after the fact I'd forgotten a few products and I hadn't really shown anything for swatches. I thought I'd do a post with some more details, the missing items and some swatches!

I'll start off with the items I forgot to include in the video.

L'Oreal Kids Tangle Tamer in Sweet Pear
Now that my hair is a little longer, it will tangle when sleeping on it overnight. I picked up this a while back but only started using it heavily toward the end of this year. The scent is very similar to actual pear and I find very pleasant! It's not heavy (I have a fairly oily scalp) and I can spritz on about 4 pumps, brush it out and it'll take down the static a bit and smooth out the tangles and you'd never know I sprayed any sort of conditioning product in it otherwise. Less than $5, sounds good to me!

Clinique Take the Day Off Cleansing Balm
I keep meaning to do a post or video about this but haven't gotten to it. As you might be able to see from the picture, this is an empty container. I repurchased it during the 20% off sale with Sephora this past November. It's a medium hard balm that melts into an oil when you apply it to your skin. I like oils for cleansing, but since I take off my makeup in the shower it's logistically a pain in the rear. Needing dry hands and face and not spilling oil all over the place, yeah. Not good. So I heard about this cleansing balm from Ruth Crilly at A Model Recommends and it sounded right up my alley. I often only use it on my eye makeup, but if I wore foundation or concealer during the day I will use it on my entire face. It ideally should be applied to dry skin with dry hands, but I've found it works almost as well with wet hands/skin so I don't bother with keeping them dry. If you get much water in the pot though, it does soften/break down a touch on the surface layer. Removes waterproof liner really well, but would caution if you really go to town and rub it into your eyes, it'll leave that hazy film oils give over your eyes and it makes my water for an hour or so after.

Sephora The Perfectionist Makeup Sponge
As I talked about in the video, my skin got really wily when I was pregnant. While it was considerably less oily (and still is, we'll see what happens when my monthly business comes back, haha) it just did not work with foundation well anymore. It would slide around but leave my pores polka-dotted with product. The one thing that allowed me to wear foundation was applying with this sponge. I didn't do it regularly because I'm too lazy to wash a sponge every day, but when I did want to make the effort it made things work. I soak the sponge in water, squeeze out the excess and then dab around to apply the foundation. Less money than a Beauty Blender and so far I haven't had any issues with ripping/holes. I would recommend it if looking for a Beauty Blender alternative!

New Mom Stuff
And since I forgot some items in the video, it only makes sense that I forgot something from the swatch photos. After the little guy arrived, a couple things helped perk up my face that were easy and made a big difference. Like I rambled on and on about in the video, I just didn't want to look like a zombie!

Clinique CC Cream in Very Light
I forgot to get a swatch of this, it's what I'm wearing in the picture here. It has more coverage than you might expect from a BB/CC cream, it's more like a light to medium foundation. It's not terribly moisturizing (odd since it's a Moisture Surge line product) but the shade is pretty good considering my pale skintone and it has SPF 30, it's on the yellow/beige side of things and helps knock down the redness on my nose and cheeks a bit. I used it all over and under my eyes quite a bit after Colin was born (once we were out of the crazy first-second months).

Cream Shadows and Liners!
I love cream shadows, I have a whole post declaring my love for them and last year's favorites also included this category! Liners are a mainstay and I always feel like I can never have enough. Either trying out a new black thinking Maybe This is the One that will work in my waterline (bzzt, unlikely) or a different shade of brown/taupe/blue/purple/etc. This time around I focused on the pencil form, but I do still love the pots of cream shadow. I featured the Milani Shadow Eyez, Jordana Made to Last 24HR (liner and shadow pencils), Anastasia Covet liners and Rimmel ScandalEyes. 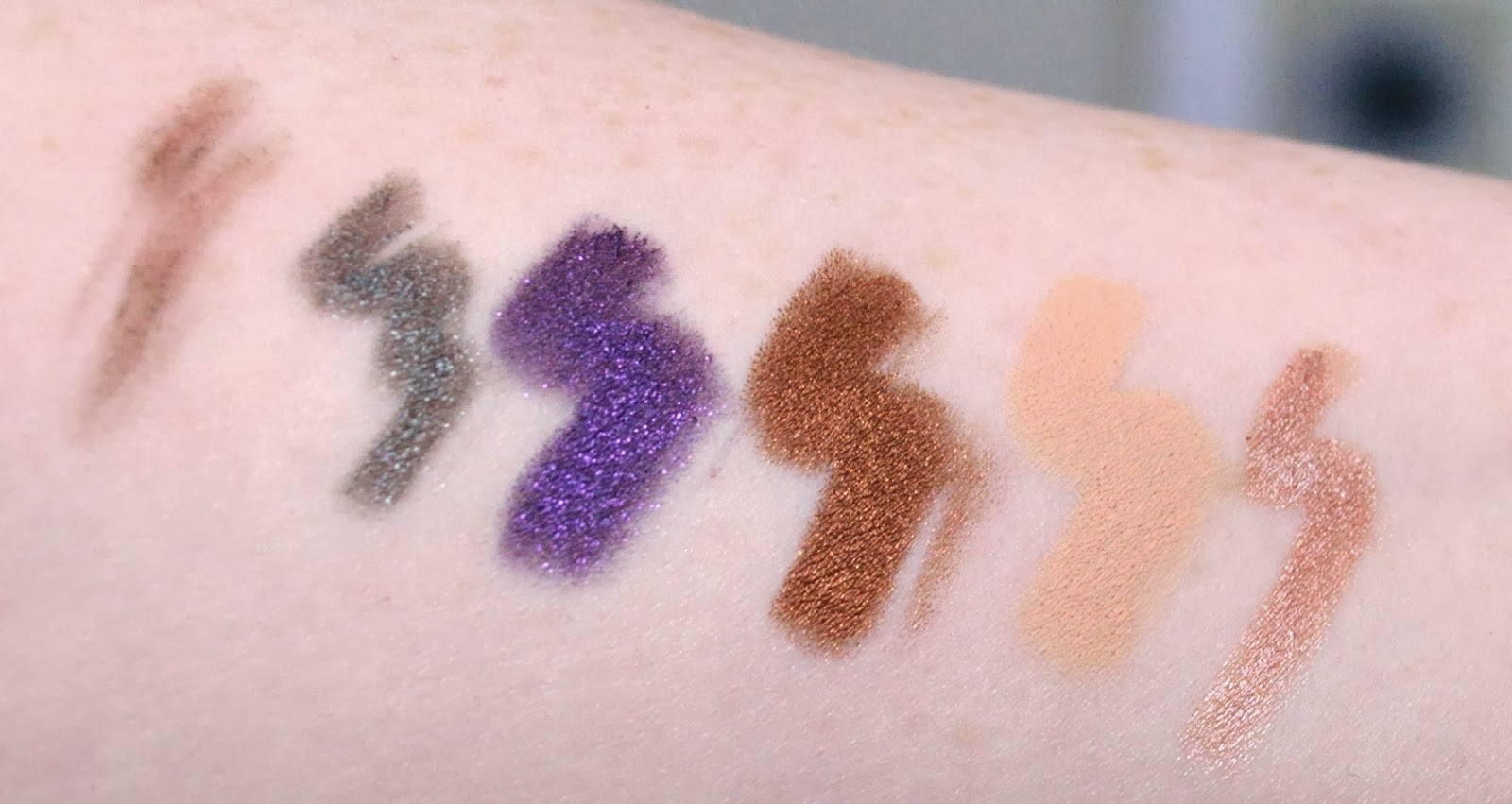 Brow Products
I color in my brows on a daily basis (due to them being a dirty blonde that often is invisible), this year I've preferred pencils to powders due to the lazy-factor and found one really worked well for me.
Studio Gear Brow Definer in Medium Ash - it doesn't go warm like so many other cooler toned brow products do, so it's quite close to the natural color of my brows but warm enough that it matches quite well with my reddish golden (white) brown hair.
e.l.f. Essential Wet Gloss Lash & Brow Clear Mascara - I use both ends for my brows, it's really cheap at $1 and I finish the tube before it gets too sludgy looking (from the brow color). The lash side makes my brows a little crunchier feeling, but both keep the hair in place fairly well, I'm on my second tube of it.
e.l.f. Essential Eyelash & Brow Wand - in the video I mentioned having this for two years, I went to check the order now and it's one month shy of three years! It's fairly soft (maybe because it's old and has been washed and used so much), has held up very well and it blends my brows after putting color in so it doesn't look so stark. Use it almost every day and love it.

MAKE UP FOR EVER Full Cover Concealer in #1 - I have a video demonstrating how I conceal acne with this concealer and that is still how I use it. It works the best of what I have and won out over all my other concealers. When I am going through a phase of heavier breakouts on my chin, it's really nice to have old reliable to lean on to cover some of it up. Also gotta laugh now, that breakout and cold coincided with getting pregnant. Hello immune system taking a vacation! :D

Almay Liquid Lip Balm in Rosy Lipped - while not the most pigmented of glosses, it is a nice color and very easy for me to wear. But the real selling point for me is that it does actually moisturize my lips fairly well and it sticks around for 3 or so hours. Not bad at all! I have worn the heck out of it after Colin was born and wore the Cantaloupe Cream shade more over the summertime.

LORAC PRO Palette - like I rambled on about in the video, I had avoided buying this for a while. I decided I had too many things like it already and I didn't need it. But, I caved and bought it anyway. And I'm so glad I did! Having so many mattes in one palette is pretty awesome, and I love the Mauve shade dearly. I used the Light Pink and Mauve in the look below, so nice to have a non-brown or gray matte look. The consistency of the mattes and shimmers are very nice, my only complaint is the Champagne shade has small glitter bits that cause fallout. Other than that, love it all! 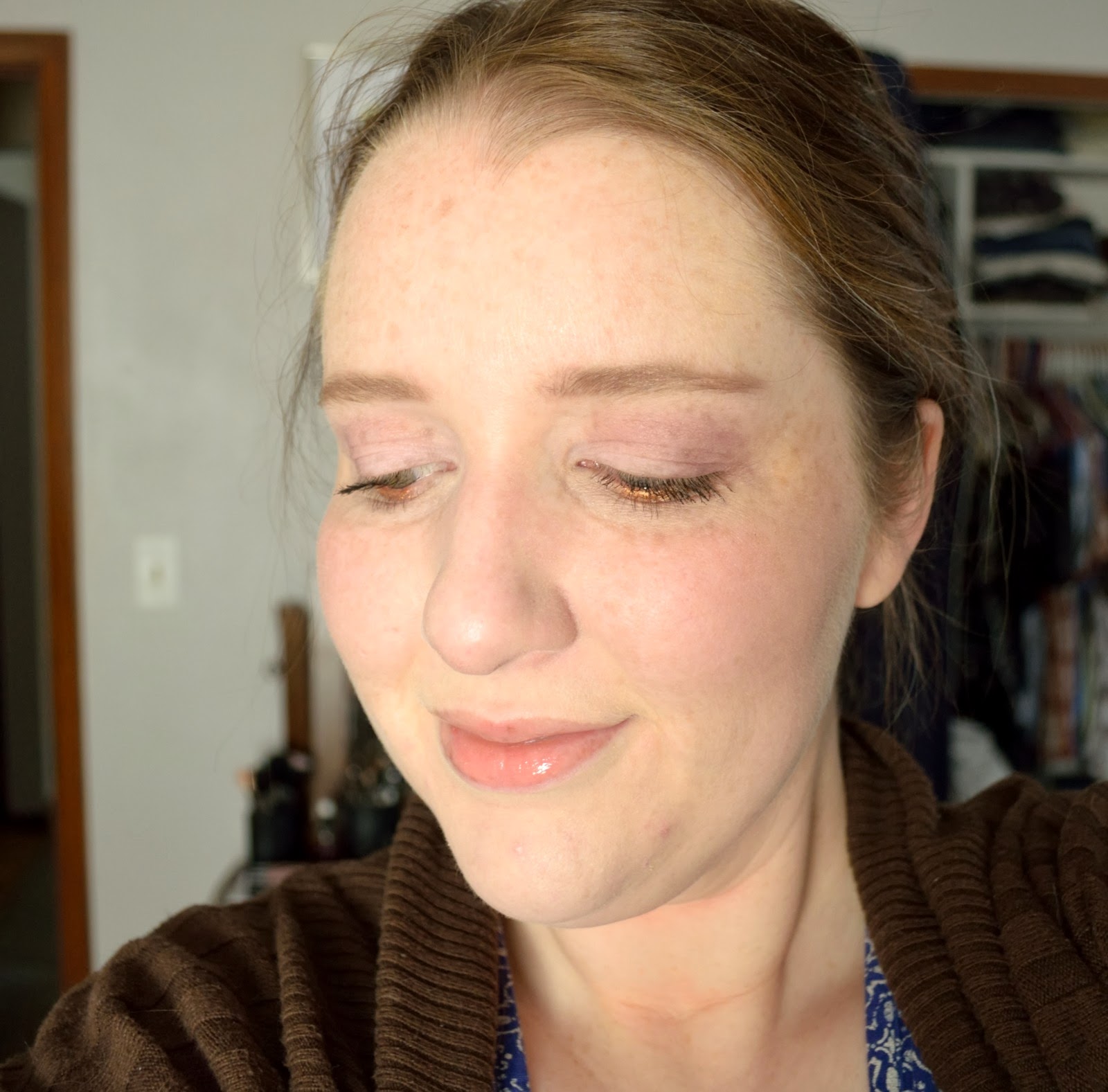 What were your favorites for the year? Any new mom tips that you'd like to share? :D Thanks for reading!