April 28, 2011
After watching some youtube videos for DYI palettes (especially intrigued by EnKoreMakeup Koren's tutorial using CD Jewel cases) I decided I should start depotting my cheap, old eye shadows.  I'd watched various depotting tutorials some time back and I figured I'd remember all I needed.  Maybe I should have refreshed my memory!  I made a good mess, now partly I will blame it on some of the packaging being fairly non-depot-friendly, but still.  Stubborn old me keeps hammering away despite things going badly when I'm on a Mission.  Come hell or highwater, those suckers were coming out!

Here's a photo of the wreckage: 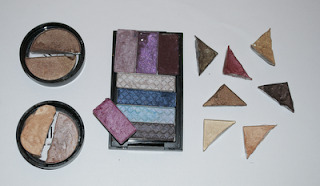 So I had two little quads and two duos from e.l.f., and Maybelline and Revlon quads.  I had almost thrown away the Maybelline and Revlon shadows, they are quite old and especially the Revlon I find very difficult to work with.  Hard to get out of the pan.  First I worked on the e.l.f. quads since they are ultra cheap ($1 each) and I knew it wouldn't be the end of the world if I completely mangled them.  Well, I did mostly mangle them!  I tried my hair straightener heating method first but found it to take too long and I was worried about burning something on the straightener etc, so I went to a candle next.  After inhaling a bunch of fumes and getting just about nowhere, I gave up.  I recall someone using alcohol to dissolve the glue, so that was my last step.  I finally made some progress, but those shadows were glued down all across the base of the pan (as opposed to a glob of glue in the middle).  I completely destroyed one pan in the quad, but luckily it was a very blah brown that I didn't care for anyway.  I did want to keep at least the cranberryish and olive tones from the quads.

I used a couple pairs of tweezers, a knife, a small thin spoon all to try to pry out the pans.  None were terribly successful with the e.l.f. shadows.  What led to the greatest success with the Revlon pans (I did these last and they came out almost completely unscathed) was inserting the knife at the side edge and popping them out with leverage.  Most were soaked in alcohol by the end of this, we'll see how they dry out.  Some I really had to repress into shape because they cracked significantly.  I'm not sure I trust myself to depot any of the shadows I actually care about!
depot products