June 04, 2011
I had been contemplating buying the new NARS palette with Orgasm blush, Laguna bronzer and Albatross highlight; at the least just checking out Albatross because I do love highlighters and I hadn't realize before that it was a white gold shimmer.  And as we know, I love gold shimmer.  I had swatched Laguna and Orgasm before, but I think I just wasn't intrigued enough to shell out the cash for both separately.  I do have a lot of blush and bronzer after all, but truth be told I'm not in love with any of them.  Some I like more than others!  Likewise with highlighters, there isn't one that I feel is over the top gorgeous, though the LORAC Perfectly Lit in Spotlight is quite lovely in its subtlety.  Anyway, I digress; I am rambling again!

So I went to the mall today with a variety of things I had sort of in mind that I could do with better products.  Under eye concealer, possibly a thicker eye cream (I have concealer problems especially because under eyes tends to always be a bit dry even after moisturizing), oil free tinted moisturizer that actually matches my shade (tried various previously, all too dark) that's easier to work with than my MUFE Mat Velvet+ when having dry patches, NARS stuff and some things from MAC.
I wanted to try out Fix+ as a toner/refresher/makeup finisher/eye foiling-helper, get the cream color base in Pearl (pixiwoo drew me to it) and I was still on the fence about buying one of the metallic pigment stacks in the Surf, Baby collection.  I ended up buying all three!

I also splurged at Sephora, bought the NARS trio and a Laura Mercier Undercover Pot which has the Secret Camouflage and Concealer as well as the setting powder (in shade UC1 fair).

I swatched all the high end tinted moisturizers that looked remotely close to my shade but everything was just too dark.  I wanted to go to ULTA to get an oil for my poor frizzy hair, crossed my fingers that they might have a brand there that would work.

Tried everything there I hadn't tried already, I had really wanted to like the Tarte tinted moisturizer but it was just too dark like the others (though lighter than most) - but at last!  I tried the LORAC ProtecTINT in Dare to Bare and it was actually a good shade!  It sheers out quite a lot, we'll see if I break out from it or causes a lot of oil production.  I wanted to try out all my new goodies on my face, so I thought it might be fun to do a layer by layer picture series with the new stuff.  Enough with my blathering on, and on to the pictures!

Here's my bare face, I kept my eye makeup on from today which was basically the CARGO eye look that I had done last weekend.  That gold eyeshadow sure is chunky, forgot to use a synthetic brush this time so I was a bit sparkly under the eyes today! 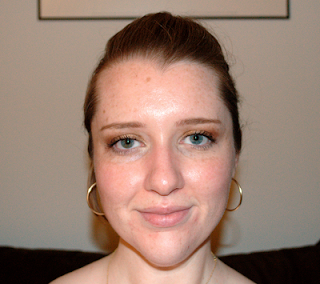 My skin is finally clearing up after that mess it'd been in, hopefully I'll have a good week before it breaks out again.  I still have some dry spots from still-healing blemishes.

Next I applied Smashbox Photo Finish oil-free primer, less shiny for the moment! 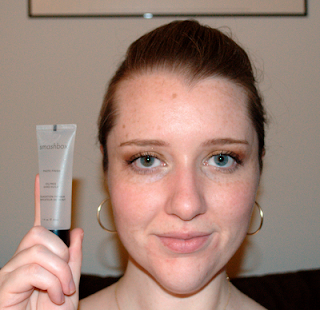 My lips were drying out (per usual) so I slathered on some of my Smith's Strawberry Lip Balm (smells like those strawberry candies with the goo inside, yum). 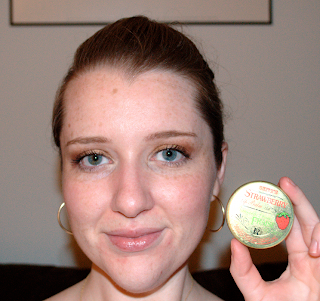 Next up, tinted moisturizer!  I can't say I see a huge difference coverage-wise, though.  I considered adding another layer, but didn't want to get gloppy. 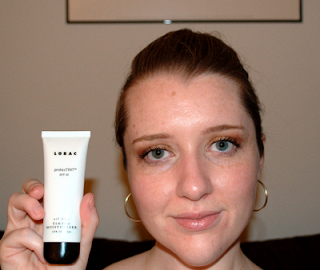 Now since I had used a makeup wipe to take off all of my face makeup, I wanted to reapply eye cream before proceeding with the concealer - especially since it's a cream and not thinner liquid, I didn't want it catching on dryness.  This is an Aveeno Lifting and Firming eye cream - it has a little shimmer in it and is somewhat thick.  I had stopped using it for a while, but have gone back to it.  I like the shimmer, I think it helps brighten the area; it does a better job moisturizing than the stuff I had been using (some Garnier pot duo thing) but it's still not great.  I applied the Laura Mercier underneath my eyes (mixed both Secret products), on my nose (gets quite red), around base of nose, on apples of cheeks where I have some broken capillaries/redness, and lastly on my chin.  I set the concealer with the powder. 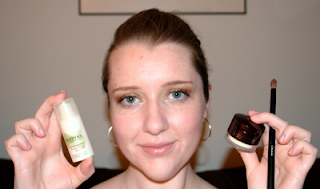 I powdered my t-zone very lightly with my Real Techniques powder brush and MAC Mineralized Skin Finish Natural in Light; whew back to a little less shiny! 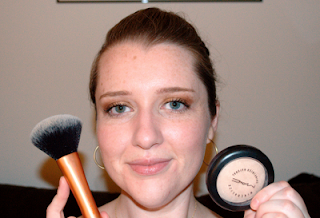 Last but certainly not least, the NARS trio.  You might be able to tell from the slightly giddy smile I'm rocking there that I'm very pleased with this.  I wasn't in to the hype about these shades, but they really are beautiful products.  I used my Sigma F25 Tapered Face Brush for Laguna (it's my go-to contour/bronzer brush), F35 Tapered Highlighter for Albatross (usually I use it for highlight and blush) and F40 Large Angled Contour for Orgasm.  So excited, couldn't even get all of the package in frame. :)  And that's one mighty big mirror!  Love it.  The packaging with the cushioned fabric zip closure is a bit odd though. 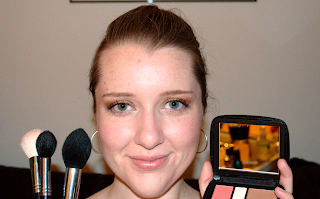 And here's my happy glowing cheeks from the side.

I applied Laguna lightly in my contour region (hollow of cheeks) but since it is shimmery, I didn't use much, just enough for a little shadow but also some bronzey glowing goodness.  I also brought it up my temples and lightly into my hairline.  I applied Orgasm to my cheekbones (where I normally apply blush).  Lastly I put Albatross on the very tops of my cheekbones and swirled up in the C shape at temples near to the eye.  I dabbed a bit down the center of my nose and a teensy bit at the tip of my chin. 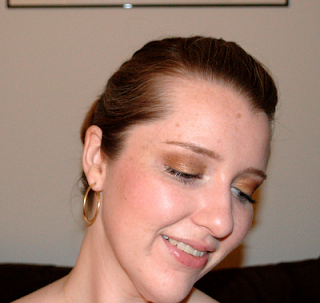 I will post about the new stuff in more detail separately. First impressions of everything is quite good!
fotd haul products