Yesterday I went to ULTA mainly to get an easier to apply non-chemical sunscreen (I think I've fully confirmed the rash that I'd been having off and on last month was due to chemical sunscreen) for my face.  While I was there, I got some goodies (will post haul shortly!) including the little stackable set of gel cream liners from Physicians Formula.  I got the Glam Green Eyes which has very light metallic green, lavendar and a black with some shimmer.

I had wanted to try them out because Tati (GlamLifeGuru) had raved about their no-budge staying power in her June Favorites.  When I got the green home to swatch, I thought it'd be a pretty neat base on the lid for the seafoam metallic pigment in the MAC Surf Baby collection stack, Surf the Ocean that I adore.

I used a few more of the new shadows I had picked up at ULTA to complete the look - Revlon CustomEyes in Smoky Sexy (made me giggle :) ) and Physicians Formula Matte Collection in Quartz Quartet.  I don't have nearly as many cool blue/gray tones, so I opted for those two yesterday -- and I had coupons+sales to take advantage of.  Trying out the Revlon Brow Fantasy, Lisa (LisaSz09) had mentioned liking, got it in Dark Blonde. 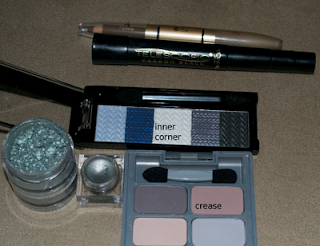 The Revlon white shade is quite pigmented and satiny, not sparkly.  I was surprised how easily I was able get the product on my brush.  Crease color went sort of warm brown on me, but I may have had a little bit of the warm dark brown from my Wet n Wild Vanity palette still on the brush :S.  Pretty nonetheless.  And I love that MAC pigment!

Both eye pictures are in natural light, the seafoam pigment loses its color and just looks like a bit of glitter in a flash picture.  And forgot to get in the product picture, but I did with my usual lack of coordination messily apply a touch of the black cream liner at the base of my upper lash line and ever so slightly (accidentally) winged it out. :)
eotd products seafoam