August 20, 2012
Last in the pictures I had in the queue of my Mascara Swatching Series, Tarte's Light Camera Lashes! It was a small sample and was fairly dried out by the time I swatched this.

Oof, I look tired with my half-done eye!  Mind you these pictures were taken around 6:30AM. :)

I think it applied a bit differently (but in a good way!) due to this. It built up very thin layers to give a little wispier volume (slender tips just darkened) and less lashes sticking together. I recall it being a bit more wet when fresh. From a distance though, I would say it's going to look about the same as most of my mascaras since I tend to glob it on the same way with whatever I'm using. 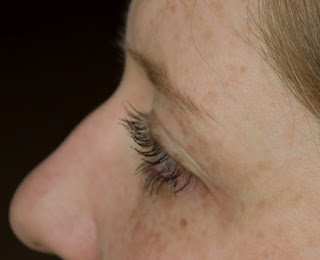 Something drier I like the looks of close-up, but does more work to get my usual volume/coverage. I like it, but wouldn't buy separately due to the cost. It would make me a little more likely to buy a kit if there was a full-sized tube of this in it.

Have you tried Lights Camera Lashes? Let me know what you think of it! Do your lashes always come out of the same or does it matter what mascara you use? Honestly I never realized how similar mine were until doing this series! :)
mascara series products swatches tarte