I had received the Illamasqua Liquid Metal in Stoic in my Alter Ego Mystery Selection kit which had a couple guaranteed colors and grab bag of others. I love a cream shadow, but was sad to read about how emollient the Liquid Metals were, figuring I couldn't use them on the eyes. Sadly I had the same experience with the actual cream shadow from Illamasqua in Crumble, crease city. But, I have today off so figured I'd give it a fair shake on my eyes and see how it went! And while I was at it, thought I'd do a little demo in a video for a couple items from the Guerlain Precious Lights Radiance Essentials Kit. 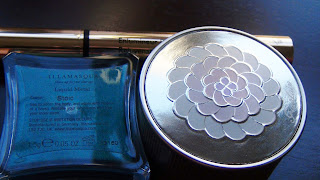 Let's get the true disaster out of the way first. In an effort to not make a mess, I used the NARS Pro Prime Smudgeproof Eye Base for a primer, put a thin layer of Illamasqua Liquid Metal in Stoic, gave it a bit to set (though it already started transferring to my crease despite only applying to my lid) and then put over the top two shadows. I used the L'Oreal Forest Smokes for the deep green on the outer lid and the deep yellow gold from a Black Radiance duo in Sunrise/Sunset on the inner lid. 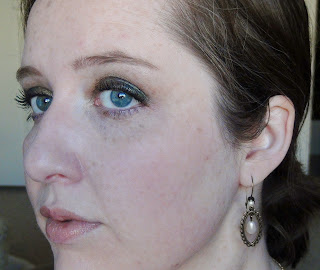 It's such a beautiful color. In the places it didn't crease like there was no tomorrow, that is. Maybe I can try to get it only on that bit of my lid where I don't have any more lid creases.. 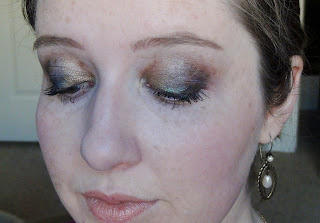 After 15 minutes, it was all gathering up into the many creases in my lids. Not a good look, my friends.

Now also in these pictures I'm wearing the Guerlain Precious Light Rejuvenating Illuminator in shade 01 under my eyes (without any other concealer or corrector) and the Meteorites in shade Teint Rosé on my cheeks. The Illuminator has a nice smooth texture, good coverage and doesn't catch on any under eye dryness (a problem I've always had). All in all, I like it. 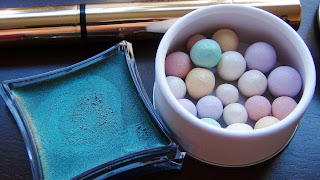 But the Meteorites, oh the Meteorites. I don't know what to say about this stuff. It has a very, very strong scent of violets and as far as I can tell has no discernable color or sheen. I gather it's more an illuminating setting powder, but I guess I was expecting the ability to see something.

On the left there (obviously) is the Illamasqua Liquid Metal in Stoic, then the Guerlain clicky illuminator pen in shade 01, and the invisible swatch via brush of the Meteorites and I used my fingers in the attempt to get some visible swatch but only got a few sparkles at the very end of the picture.

I have seen some swatches online that have visible something in them for Meteorites. Maybe it's just that I'm so pale, it blends into my skin color. I have no idea. But with the rampant scent and basically nonexistent effect, I am not impressed to say the least. The kit also included a brightening primer that I haven't tried (due to my oily skin and less than great luck with primers), the full sized Illuminator and this mini/travel sized Meteorites for $57 at Sephora. I had a coupon for $20 off $50 so I don't feel too bad about making the spend to try out some stuff from a luxury brand I've never used.


Have you used any of these items? Had any better luck than I did? Can you actually see Meteorites on your skin?! :)
guerlain illamasqua products review swatches video