March 15, 2013
So I got this idea in my mind that I wanted to try out brown mascara. I'm sure in my teens I used brown black shades but switched over to black or blackest black whenever possible later on. I didn't think about it for a long time, but suddenly I wanted to try it. Because I am so fair, I thought maybe the brown would look less harsh. I toured around Target looking at all of the brands and no one had a plain brown. I was a little surprised, but my last ditch effort of Maybelline Great Lash yielded results. I picked up Dark Brown.

After initially trying it out, I wasn't sure I could even see a difference. The formula and brush with Great Lash gives somewhat toned down, defined lashes with not much for volume. Other than that, hum. So, figured the real test would be a picture with brown macara on one eye and black mascara on another. Would the difference show then?

I'm voting no. In the picture above, it's fairly obvious that there is a different type of mascara on each eye - but that's about it. On the left is Maybelline Great Lash in Dark Brown. On the right, Benefit They're Real which is giving me a little more lift and volume. 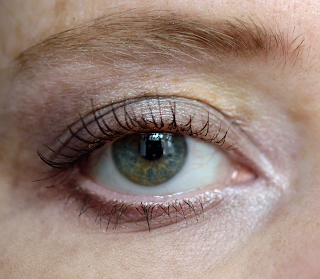 Here's a close-up view of the eye with Maybelline Great Lash in Dark Brown. Still not seeing it. The only time I could really tell it was brown was when the photo was adjusted with way too much warmth in it. The look is softer, but I think it's just due to the lack of volume. I think the brown would need to be quite a bit lighter than this Dark Brown for me to identify it as brown.

Have you tried any brownie-brown identifiably brown mascaras? I'd love to try one! What's your take on brown mascaras in general? Thanks for stopping by!
benefit mascara series maybelline products swatches