May 04, 2013
I was practicing my winged liner the other day after being inspired by Lisa Eldridge's video for Modern 'Baby Bardot' look - she makes it look so easy of course. I've had a couple of posts/videos explaining how I try to work with my slightly hooded/mature eyes with winged liner but doing anything dramatic is usually still a complete failure. Here's a recent post about my eye shape, slightly rounded/hooded/downturned for reference with bare eyes and a simple everyday winged liner.

Per usual, my first attempt was indeed quite a flop. While trying get the angle high enough, I ended up pulling the wing across most of my visible lid. Gigantic triangle o'liner. I removed everything and started over again. One thing I will note about the products I used, I'm not sure if it was that I hadn't let enough time pass after using the makeup remover but the gel liner was feathering a bit on me so I had to touch up with liquid liner at the end.

I created the wing somewhat successfully and kept playing around. I extended it into the far inner corner first, later I brought it into the lower lashline inner corner as well. Then I started playing with a lower lash outer wing which I don't recall ever doing before. I think it's a little easier since I wasn't dealing with a big funky crease (or two) in the middle of the line.

Doing looks like this makes you come face to face (quite literally, groan) with the lack of symmetry in your features. The hooding is heavier on my right eye (left here) and the shape of the inner corner is definitely different between the two. It's much more flattering to capture a look like this at an angle in photographs. Straight on, the wing for me does also get a little lost due to my lash length and how much mascara I glopped on.

I used an angled liner brush from Too Faced (came in the Teddy Bear kit) to hopefully make it easier to stamp on the start of the wing instead of drawing it. The liner brush however is extremely thin and isn't terribly easy to use for the rest of the wing. I used a Sigma liner brush to fill in everything else. For the very fine detail work around the inner corner, I used the fine liner brush from the Sigma Performance Eyes kit (Real Techniques also now have a very tiny liner brush that I imagine would work similarly). 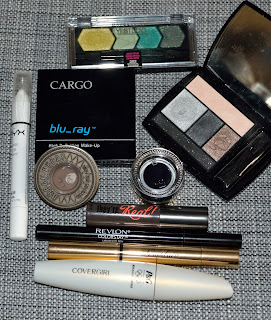 Wings aside, I was just playing around. Well I suppose this whole look was playing around, but you know. I didn't have any great plan of where it was going, but once the liner was fleshed out I decided to continue and was pleased enough with the end result to take some pictures and share with you!