October 25, 2013
So for a while, I had many days that were makeup free after the baby arrived but I've been making an effort to get something on my face most days now. I feel a little less like a zombie if I can catch a glance in the mirror while cleaning up pump and bottle parts for the millionth time with some makeup on. :) I've always liked the process of applying makeup, so there's that too!

I still haven't gotten my makeup collection in an accessible place after the move into the house. Good news is, I have a vanity and storage piece figured out, they just need to be assembled. :) Everything in this post is relatively new to me, have not mentioned them in videos or blog - but of course I rambled on about some of them on twitter as nicsviolet. You can follow me there for thoughts as they come, though lately it's mostly baby blather. Also baby and kitty pictures, with occasional makeup on instagram as nicsviolet too! 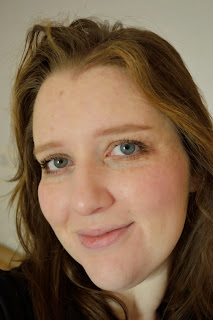 For my face, I'm wearing the Clinique CC Cream in Very Light - one of the very few BB/CC cream/tinted moisturizers that is actually light enough. It's a hair dark for me and quite yellowy beige (great for canceling out the redness in my cheeks and nose) but I say it's close enough. My skin is still more normal (pre-pregnancy it was very oily) and oddly even though this is a Moisture Surge product, it dries down quite matte on me. Depending how much oil I have during the day, I will get somewhat shiny after several hours - or not at all. It has a good amount of coverage, more like what I'd expect from a light-medium foundation. It doesn't feel like anything on my face, but if I touch my face I do get the feeling there's something a little tacky on it. I plan on setting it with a finishing powder at some point (once I unpack or buy one) to see if that helps. But overall, I like it for the SPF 30 and redness cancellation in one go. 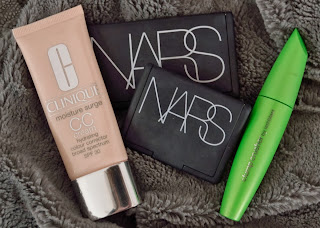 On my eyes, I'm wearing two shadows from the NARS And God Created the Woman palette. It has Galapagos in it, which was a shadow I had swatched and fell in love with way back when I first really got interested in makeup but never bought. Of course I'm not wearing Galapagos today, but you know! ;) I have Bellisima all over the lids and into the crease (center matte taupe) and a teeny bit of Alhambra (shiny champagne top left) in the inner corner. 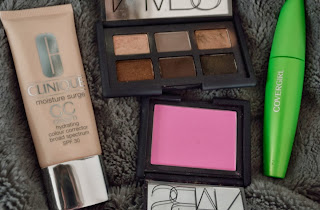 On my cheeks, I have NARS Gaiety which is a light pink. I had been looking for a light blue based pink for some time, strangely difficult to find a good one! It looks darker in the pan than on the skin. Really glad I picked this up, it's super easy for me to wear and flattering.

Last item of interest, CoverGirl Clump Crusher mascara. I knew people were raving about it, but I'm rarely too excited by mascaras so I wasn't in any rush to try it out. Recently I was running out (my Great Lash finally dried up) so I went for the bargain option of a two pack of Clump Crusher at Target. The formula is nice, the wand is easy to use - overall I'd buy it again but I don't think it's anything mind blowing. It's easier to work with than LashBlast, so far I think I've only poked myself in the waterline twice over several weeks. 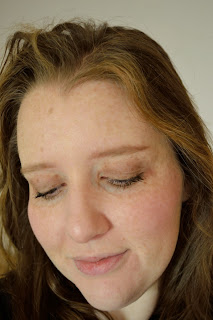 The rest of my face is the old standby Urban Decay matte shadow in Shakedown on brows (discontinued) and some 8 hour Chapstick on my horribly flaky lips (I am not too impressed with it). I've been less diligent about keeping them covered in balm lately and the lack of sleep makes me tend to slide back into a very old habit of tearing the flakes off. I'm working on it!

Whew, finally done! This post took a lot of stops and starts, little man is 2.5 months old and has me running in circles. :)

Hope you are having a wonderful day and as always, thank you for reading. Let me know if you've tried any of these things out and what you thought of them!
clinique covergirl fotd nars products